One of the concerns we had when Louis was a piggy-pup was making sure his growth was right; not too fast and not too slow. We tried to follow the feed instructions and also take into account the treats he was getting. We decided that the best way would be to try and weigh him at the vets every week. This served three purposes, he got treats off the girls at the vets, he came to think of the vets as a good place to visit (this has paid dividends when having to take him for check-ups) and, thirdly, we got to weigh him. 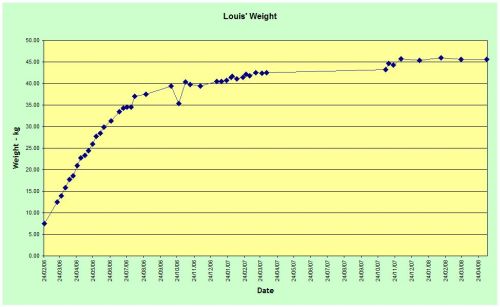 Anyway – the outcome of this is the chart above. Other Ridgeback owners may find it useful but we certainly don’t know if Louis’ growth was “normal”. Louis’ weight has stabilised around 45kg. We still go to the vets most weeks as it allows us to keep an eye on how many treats he’s mooching off us. We think the blip on the chart is when the vet’s scales were out of calibration. You can click on it to see a larger version that’s more legible.

Update 2010 – since Louis had his nethers dealt with it has been a bit of a battle weight-wise as he wants to eat and eat and eat. Gravy bones are off his menu but Louis still considers that Sue and I are treat dispensing machines.

This is one of the busiest pages on this site (by busy I mean there’s the odd tumbleweed passes through) – if you found Louis’ weight chart useful then drop us a line via the contact page as that will make it all worthwhile.

Update 2011 – we’ve had a few emails from visitors who have found the chart useful but wanting to know how the dates on the bottom axis related to Louis’ age. I’ve done a new chart with the same data but used weeks for the x axis. Here it is:-